In the topic of film studies contact librarian lorraine wochna and/or check out the Film Studies Libguide. 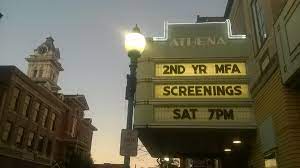 Peter Davis's landmark documentary unflinchingly confronts the United States' involvement in Vietnam. Using a wealth of sources--from interviews to newsreels to documentary footage of the conflict at home and abroad--Davis constructs a powerfully affecting portrait of the disastrous effects of war.

AVON AND FILMS ON DEMAND INCLUDE FEATURES AND DOCS; some distributors and titles are listed below.  AVON and FOD have tons of content ranging from Feature films to Training vids, Documentaries, News, History.

FILMS ON DEMAND and OHIOLINK have provided 1 year access to all Films on Demand Feature Films for Education collection.  Over 600 titles

Below are some to the top distributors of feature films and documentaries, a few film suggestions from each distributor have been added to peek your curiosity.  We don't have everything, but we have a lot of good stuff from a lot of good distributors and filmmakers.